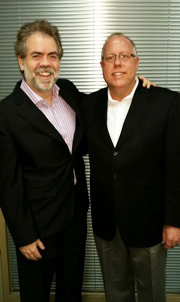 The C.J. Group of Companies of Toronto purchased 30-year-old Prime Imaging, a well-known commercial-print shop in the area, which in 1996 began along its now pervasive path of large-format-inkjet printing.

“This partnership is a great fit for our ever-expanding group of companies,” said Jay Mandarino, President and CEO of the C.J. Group, noting Prime Imaging as the 18th operation to come into the larger group’s fold. “There is a lot of synergy between our two organizations. Eco-friendly print production and protecting the environment are paramount at both CJG and Prime Imaging.”

Currie began as a bookkeeper at Prime Imaging in 1989 and worked his way into sales and managerial roles before becoming part owner of the company, along with the two original founders. Currie then took over the operation completely in 2003.

With the acquisition, the C.J. Group now takes on more printing equipment, including multiple large-format-inkjet presses, die-cutting systems and what are described as two photographic presses, which allow for high-end output on paper and Duratrans backlit material.