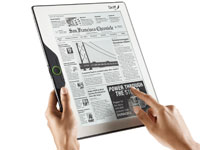 The Consumer Electronics Show in Las Vegas this week is to include several e-reader and tablet-computing debuts, including a dual-screen, full-colour, non-E Ink device from Taiwan-based MSI, as well as a $199 tablet reader by Freescale, the chip provider for Amazon’s Kindle. On the other end of the size scale, a company called Interead will be introducing the smallest e-reader, weighing in at 5.8 ounces for a 6-inch E Ink screen.

More details have also emerged for the e-reader venture of Hearst Corporation, Skiff. The Skiff Reader, which has a somewhat vague release date of “2010” features the largest e-paper display on the market, a 11.5-inch screen with a resolution of 1,600 x 1,200 pixels.

The large size of the device allows better reproduction of newspaper and magazine content. The device weighs just one pound and features a touchscreen display by LG Display. Connectivity will be handled by Sprint via 3G, but the e-reader is also capable of WiFi connections.

Apple, meanwhile, will be announcing its Tablet device on January 27, at least according to the Wall Street Journal, to be shipped in March.