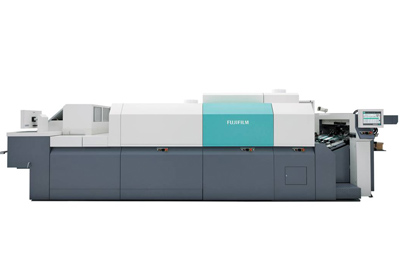 Last week at its facility in Illinois, Fujifilm North America hosted journalists and analysts for a hands-on look at its new J-Press 720 technology. First unveiled at drupa 2008 in Germany, the J-Press 720 is a B2-format, sheetfed-based inkjet press that Fujifilm is aiming at the commercial-printing market.

After announcing its commercial availability in late-2010 at the Graph Expo trade show, Fujifilm last week announced that Gilson Graphics of Grand Rapids, Michigan, is scheduled to install North America’s first J-Press 720 sometime this Fall. Fujifilm installed the continent’s first J-Press at its own facility back in May. Fujfilm indicates there are currently three J-Press beta sites in Japan.

With around 160 employees and US$23 million in annual sales, Gilson is a medium-sized commercial printing company running three 40-inch manroland presses, toner-based Indigo presses for colour, which it got into in the late-1990s, and wide-format machines from Fujifilm, HP and Mimaki.

The J Press 720 is built around a Fuji Dimatix inkjet engine with 17 Samba piezo-electric print-heads – each holding 2,048 nozzles – allowing for 4-colour process printing of water-based inks. The 20.8 x 29.5-inch format press currently runs at a single speed of 2,700 B2 sheets per hour, while producing a maximum resolution of 1,200 by 1,200 dots per inch – four greyscale levels.

The machine employs a pre-coating unit to handle both coated and uncoated stock, in a range from 70-lb text up to 14-point board. After the work is dried by six halogen lamps and heating elements, the J Press 720 relies on a CCD camera to read a test bar (one colour per sheet) and analysis nozzle effectiveness. The J Press 720 ships with Fujifilm’s XMF workflow.