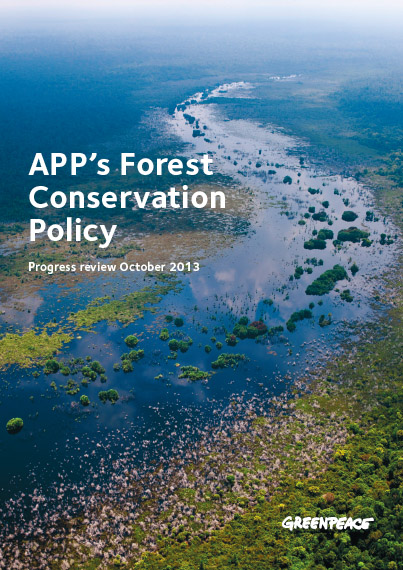 Greenpeace this morning released a new report after a nine-month examination of Asia Pulp and Paper’s Forest Conservation Policy (FCP), which the papermaker launched in February 2013 in an effort to end deforestation in its supply chain.

Asia Pulp and Paper (APP) issued a statement that it welcomes the Greenpeace report, called APP’s Forest Conservation Policy, Progress Review, which highlights a number of positive steps taken by APP since the launch of the FCP, as well as future challenges. When APP introduced its FCP, Greenpeace agreed to suspend its campaign against the papermaker, while continuing to provide constructive criticism and advice as the policy is implemented.

Greenpeace’s progress report on APP looks at all aspects of how the FCP is being implemented and states, “The company is serious about its FCP plans and its key senior staff are genuinely committed to driving the delivery of these new commitments.”

APP’s FCP introduced a moratorium on all natural forest clearance, which remains in place while assessments are carried out to determine which parts of APP suppliers’ concessions are of High Conservation Value (HCV) and which are of High Carbon Stock (HCS), all of which will be protected. The assessments are being done by The Forest Trust (TFT) and HCV assessors. They are scheduled for completion in the first half of 2014.

“It is very encouraging that Greenpeace’s report recognizes the progress we have made since introducing the FCP just nine months ago,” stated Aida Greenbury, Managing Director of Sustainability for APP. “We know that many years of work lie ahead, but this report has given us additional confidence that we are on the right path as we aim to put a permanent end to deforestation in our supply chain.

“Scrutiny from Greenpeace and other NGOs has been an important driver for us and we hope to continue to work with all stakeholders in this way over the coming years.”

Asia Pulp & Paper Group, with manufacturing locations across Indonesia and China, is one of the world’s largest vertically integrated pulp and paper companies, with an annual combined pulp, paper, and converting products capacity of over 18 million tons. APP-Indonesia and APP-China currently market their products in more than 120 countries across six continents.

The Greenpeace report highlights APP’s following positive steps taken since the launch of the FCP in February 2013, including:

Overall implementation of the natural forest and undeveloped peatland moratorium;

Self-disclosure of two breaches of the FCP;

Action to improve the management and implementation of the FCP based on early lessons and breaches;

Plans to implement a Procedure for Association to address how the FCP is applied to future pulpwood suppliers;

Decision to seek alternative uses for Mixed Tropical Hardwood (MTH) – cleared from non-HCS and non-HCV areas (This issue, according ot APP, will be addressed through a working group that includes a number of NGOs_;

Decision to undertake third-party auditing of the implementation of the FCP; and

The report also raises a number of challenges for further improvements, including:

APP should set out its plan to engage other stakeholders to help address the issue of overlapping licenses and share details of remaining challenges on its online monitoring dashboard;

APP should publish a sustainable forest management-planning schedule on the dashboard;

Progress on peatland assessment and management should be accelerated;

Conservation plans must have the input of credible experts;

APP must increase transparency on work in China;  and

APP must now demonstrate that long-term forecasts for its plantation suppliers in Indonesia are sufficiently robust to stand up to scrutiny.

View a PDF of the full Greenpeace progress report on APP.