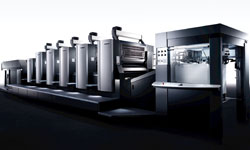 This May for IPEX 2010 in Birmingham, UK, Heidelberg will be introducing a new press in the 40-inch segment called the Speedmaster CX 102. The press will have a production speed of 16,500 sheets per hour, which means it will slot into the company’s lineup just under the flagship Speedmaster XL 105 press, which runs at 18,000 sheets per hour and above the company’s CD102, which has a speed of 15,000 sph.

The company has said that many technologies from the XL series will be making its way to the CX press, including the fully-automated Preset Plus Feeder and Delivery, dynamic sheet brake, and the gripper system.

“With the introduction of the Speedmaster XL 105, we have
successfully established a completely new performance class in the last
few years. Right from the start, the Speedmaster SM 102 and CD 102
series have benefited from the achievements we made in XL development,” said Stephan Plenz, Member of the Heidelberg Management Board and
responsible for the equipment sector. “Thanks to the host of
innovations and new maximum speed of 16,500 sheets per hour, the
Speedmaster CX 102 is an interesting option for anyone who is impressed
with the XL technology and wants to combine it with the benefits of the
CD 102 platform.”

The press will be offered in various configurations, including UV, dual coating and foiling, however the CX 102 is not a perfecting press.