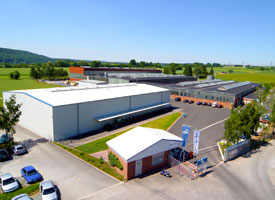 Koenig & Bauer AG has announced plans today to close its Trennfeld, Germany, plant by the Autumn of 2013. Its production capabilities will be rolled into its main plant in Würzburg, just 25 kilometres away.
The Trennfeld plant, opened in 1964, currently employs 220 staff to assemble printing units and superstructures for commercial and newspaper presses. KBA stated that its Trennfeld assembly staff will be offered new positions in Würzburg.
“The decision made by the management and the supervisory board to integrate the Trennfeld plant was not an easy one. From an economical point of view, keeping two only partly utilized plants open does not make sense,” said CEO Claus Bolza-Schünemann. “Our web business can only look positively into the future when all employees, space and equipment available are fully utilized. As a result of the relocation and the closer proximity to construction and manufacturing activities it brings with it, we expect simplified processes and considerable savings.”
The move is in response to what KBA says is “supplier over-capacity for a global market which has shrunk by more than half since 2007” with “no expectations of sustainable market recovery of any magnitude.” The company also moved production of its banknote printing production from the subsidiary KBA-Mödling AG in Austria to the main plant in Würzburg and has also involved a significant reduction in personnel and the splitting of the plant in Frankenthal into two limited companies last year and opening them up to external contractors.

According to KBA, the realignment of its plants started three years ago has played a major factor to it being the only major press manufacturer to remain in the black since 2009.