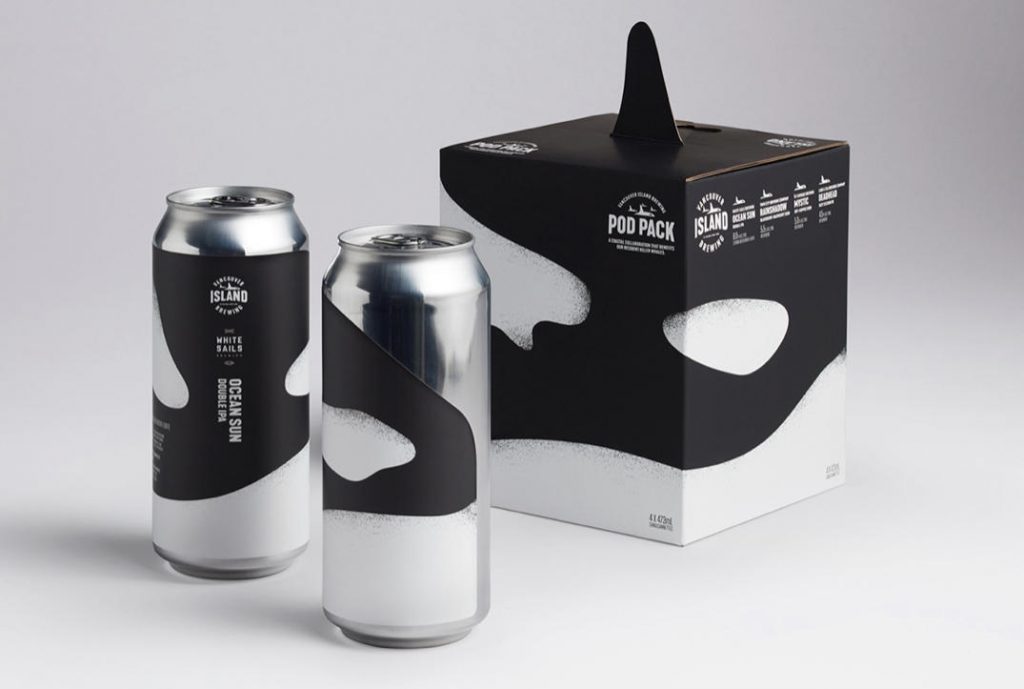 Proceeds from sales of the Pod Pack went towards the Pacific Salmon Foundation’s effort to preserve the wild B.C. salmon stocks, a critical food source for killer whales. Photos courtesy of One Twenty Three West

Vancouver Island Brewing of Victoria, B.C., recently raised greater awareness for the population decline of British Columbia’s southern resident killer whales (SRKW) and its own company brand through an eye-catching, limited-edition promotional pack of beers. Unlike other resident communities, the SRKW is only one clan that consists of three pods or family groups. Dubbed the Pod Pack, the mix pack consisted of four different beers, each one created in collaboration with a different local brewery on Vancouver Island and named after a specific animal in the critically endangered SRKW population.

Available the last week of July in British Columbia and Alberta until it sold out, proceeds from sales of the Pod Pack went towards the Pacific Salmon Foundation’s effort to preserve the wild B.C. salmon stocks, an important food source for killer whales, also known as orcas.

Each Pod Pack beer is housed in a 16-oz tall can decorated with reproductions of the unique eye- and saddle-patch markings of the beer’s titular orca. Differences in the shape of these markings, located above and behind an orca’s eyes and behind its top or dorsal fin, help researchers identify each orca individually.

“The markings form such beautiful patterns that it was a no-brainer to use them in the package design,” says Eric Seymour, Art Director and Designer at One Twenty Three West, based in Vancouver, B.C., who conceived and designed the Pod Pack. He first fell in love with orcas during frequent childhood trips with his parents to Vancouver Island and the nearby Gulf Islands. “The first second you see an orca is an awe-inspiring, life-changing experience,” he recalls.

Westkey Graphics of Burnaby, B.C., which produced the labels for the cans, applied a soft-touch laminate to the labels after they were printed on a Nilpeter flexographic press. Bob Adams, National Account Manager at Westkey, explains the laminate gave the labels a tactile quality that made the cans feel rubbery, similar to the skin of a living marine mammal. As well, Great Little Box Company of Richmond, B.C., which produced the Pod Pack cartons, worked closely with the One Twenty Three West team to create a finish for the carton that would replicate the labels.

“For a packaging project, we always do a competitive analysis up front to make sure we are not stepping on any competitor’s toes and that our packaging will stand out from everyone else’s on the shelf,” Seymour continues. “The dorsal fin on top of the Pod Pack carton is a unique feature that definitely makes it stand out.” He recounts that one of the biggest challenges was to ensure the structural integrity of the carton.

Shari Guest, Packaging Specialist – Folding Carton at Great Little Box Company notes that figuring out how to shape the fin to mimic the orca’s anatomy while also being a functional closure was a challenge that required multiple mock-ups and tests. Finding a suitable solution, Seymour explains, took at least four or five trial runs of walking around the office carrying a mock-up carton full of beer cans. The earliest of these experiments ended with the cans dropping all over the floor.

“Vancouver Island Brewing’s brand involves being part of and supporting the Vancouver Island community and lifestyle. People love the whales and the locale and were attracted by the compelling story the Pod Pack tells,” Seymour says. Research finds the SRKW population has declined over 20 percent, from 98 orcas in 1995 to only 73 orcas in 2019, a 30-year low.

Resident killer whales are only one of three distinct ecotypes of killer whales found in Canadian Pacific waters and are further subdivided into northern and southern populations. It is not all killer whales but only the specific SRKW population that is endangered. Historically these endangered whales spend from May to October feeding on salmon in the waterways off the coast of British Columbia and Washington, but scientists fear these animals now face nutritional and health challenges and are not returning to their summer residence because of too much vessel traffic and sound pollution and not enough fish. Accordingly, one dollar from the sale of every Pod Pack was donated to the Pacific Salmon Foundation (PSF), a non-profit Vancouver-based charitable organization dedicated to protecting, conserving and restoring wild Pacific salmon and their natural habitat in British Columbia and the Yukon.

The goal of the Pod Pack was to raise $20,000 for PSF, but public support for the cause proved to be so high, the team doubled its production run.

“The orca is a majestic mammal and an iconic symbol of Vancouver Island, so it’s vitally important for us to do what we can to keep the population thriving. We hope that this Pod Pack collaboration will not simply raise funds, but also help raise awareness for our B.C. resident killer whales,” says Chris Bjerrisgaard, Marketing Director of Vancouver Island Brewing.

This article was originally published in the November 2019 issue of PrintAction, now available online.