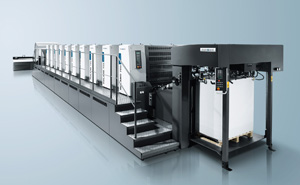 Pertaining to its name, directly driven plate cylinders permit all printing plates to be changed simultaneously, as each printing unit is equipped with a fully automated plate changing system. The company also provides optional QuickChange tools, such as QuickChange Job that begins a makeready sequence, while QuickChange Air stores the press’ air settings.

manroland will also continue its focus on large-format sheetfed presses, particularly around the ROLAND 900 XXL that is available in four formats: 7 (1,120 x 1,620 millimeters), 7B (1,200 x 1,620), 7B-plus (1,260 x 1,620 ) and 8 (1,300 x 1,850). The press can reach speeds of up to 12,000 sheets per hour in its largest format size, while the format 7B-plus format hits a maximum speed of 13,000 sheets per hour. Given its size, the machine relies heavily on the company’s QuickChange makeready features, such as the QuickChange Coating system for changing from UV to dispersion coating. The company also points to its QuickChange Clamp and QuickChange Surface technologies as being particularly suitable for its 900 XXL press.