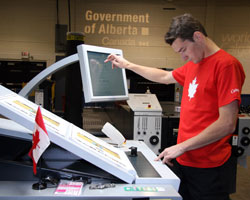 In a tightly contested competition, Simon Beauchamp of Quebec was awarded with a bronze medal in the offset printing category at this year’s WorldSkills competition, held in Calgary. Two gold and two bronze awards were given out by the organizers.

Ernst Martin of Switzerland had the top score of the competition with 542, followed by Kikuchi Noriaki of Japan with 541. Germany’s Groß Stefan also took home a bronze with a score of 533. Beauchamp achieved a score of 531.