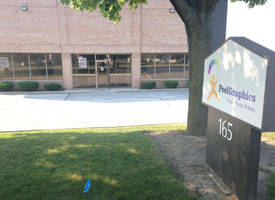 PrintAction spoke with Ron Morgan, who led Peel Graphics’ wide-format operation in Markham, which was described as “a bit of a disaster” by one of the parent company’s principals after their August bankruptcy filing.

Headquartered in Brampton, Peel Graphics made its bankruptcy filing on August 9 listing total liabilities of approximately $6.6 million, of which around $4.8 million was owed to unsecured creditors. Peel’s bankruptcy filing also listed more than 170 creditors of which the majority are based in the Greater Toronto Area’s congested printing community.

After the bankruptcy filing, Advertek of Vaughan, Ontario, announced on August 20 that it had purchased some of Peel’s assets and also hired a majority of the company’s employees, including Andrew Cook, former President and co-owner of Peel Graphics along with its former General Manager, Susan Nyilas. PrintAction then spoke with the owners of Advertek and Andrew Cook about the asset purchase. When asked about Peel’s bankruptcy filing, Cook said, “We opened the Markham facility two years ago and I would call that a bit of a disaster. It took quite some time to get work going in the wide-format arena and it really caused a lot of problems for Peel Graphics. At the Brampton location, we really didn’t have a lot of issues – it was business as usual. The Markham facility was a big challenge for us.”

Morgan helped establish the Peel Markham wide-format operation two years ago, shortly after his company, Acuity Solutions Group of Richmond Hill, Ontario, closed its doors in June 2011. Several of Acuity’s former staff, just over 25 people, joined Morgan at Peel Markham by the third week of July 2011 and the facility opened up in August.

“I don’t want to be tainted with a brush,” says Morgan, in response to Cook’s assertion of Peel Markham being a disaster while the company’s long-standing Brampton plant faced few issues. “I already went through one receivership. I take ownership of it. I don’t want to be tainted with the [Peel] receivership when we did everything in our power to try to make it not happen.”

Morgan became a partner in Acuity shortly after the turn of the new millennium when the company was generating around $2 million in sales. Five years later he bought out his partner for $3 million and continued to grow Acuity toward a peak of generating more than $18 million in annual revenues. When North America’s recession began to hit in 2007, Morgan explains Acuity’s annual sales plunged to around $12 million.

“Over the next 12-month period I had support from the bank that we reported to regularly… We were finally starting to show a positive EBITDA and we were doing a little bit better,” says Morgan, describing the final days of Acuity. “I lost my bank manager, who was a supporter. He was transferred back to India.”

Acuity at the time was still operating out of covenant – not meeting required financial ratios – with its primary lender, the State Bank of India. Morgan says the bank suddenly decided to shut Acuity’s doors one Friday afternoon with Grant Thornton appointed as trustee. When Acuity was shuttered it had around $ 1.9 million worth of unsecured creditors and Morgan says he lost $4.5 million of his own investment in the company.

“I might not have been perfect in what happened with Acuity, but we tried our best,” says Morgan, whose prior financial agreements disallowed him from presenting objections to the State Bank of India to postpone the receivership. “We were straight with everyone and we had no control. We did not choose to put Acuity into the hands of the trustee. We did the opposite.”

Morgan says he soon after began discussions to start up a new wide-format operation similar to Acuity with Cook and Nyilas of Peel Graphics, which primarily generated revenue out of their Brampton location by printing for the trade in Toronto. Morgan claims the Peel Markham facility, starting from zero, eventually began selling around $6.2 million worth of business of which approximately 40 percent was generated from wide-format and 60 percent from offset lithography funneled to Peel’s Brampton location. “We were going to bring Peel into point-of-sale [work], which would mean that Peel would get contracts with the likes of Coca-Cola and Kraft and Mondelez, and we did that.”

In his nearly two years of running Peel’s Markham facility, Morgan says never took on an ownership position with the company even though this direction was discussed. “At any time, Peel could have shut down the Markham location,” says Morgan. “My sole job at Markham was to manage production, which we did efficiently, and to manage the Markham people. The only people who could influence the outcome of the company were the two owners.”

Morgan says, after about six months of running the Markham location, he was asked to attend a meeting in Brampton and informed of Peel’s existing debt challenges. “One little plant in Markham, no matter what overhead you throw at it, could not have caused those issues,” says Morgan, explaining he was privy to much of Peel’s financial information despite not holding interest in the company. “I had no ability in any way to influence the income or the non-profit of Peel other than sales.”

Morgan says he discussed various proposals with Cook and Nyilas to fix Peel’s debut issues, which included owing the Canadian Revenue Agency approximately $473,000. However, he asked for any such investment to solely focus on the Markham operation, which he did not want to shutter. “I got a phone call in June asking, one more time, will we shut down Markham and move to a different plant, and I said no.” Morgan claims he then received a phone call over the Canada Day holiday weekend and was told not to come into work on Tuesday. “As the employees arrived one by one, they fired each employee on the spot and they locked me out,” says Morgan, who claims to also be owed money by Peel’s former owners. Morgan says he has since resigned from Mi5 Print & Digital Communications Inc., where he became VP in July 2013, because of the negativity surrounding the bankruptcies of both Acuity and Peel.