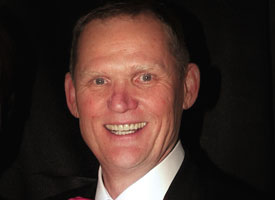 Earle O’Born, Chairman and CEO of The Printing House, will receive the inaugural John A. Young Lifetime Achievement Award at the Canadian Printing Awards gala, November 10, in Toronto.

The John A. Young Lifetime Achievement Award, named after the founder of Youngblood Publishing and PrintAction magazine, will be awarded annually to an individual who has made significant, pioneering contributions to the printing industry over their career. This award, determined by PrintAction magazine, is being introduced as part of the new Canadian Printing Awards program, which builds upon the past five successful years of the Environmental Printing Awards.

Mr. O’Born is being recognized for enormous industry contributions made during his 50-year entrepreneurial build of The Printing House Ltd. (TPH), as well as his incredible philanthropic efforts made through the TPH Charitable Office. He continues to be actively involved with TPH.

In 1961, O’Born founded TPH as one of the first instant-printing companies in North America. Over the past five decades, O’Born made sure TPH remained on the leading edge of printing technology and strategy, which has resulted in what is today’s largest privately owned network of printing operations across Canada. From a single 1961 location, TPH now operates 70 printing locations across Canada.

The TPH Charitable Office was formed in 1983 by O’Born and his wife, Janice, to “help others, help themselves.” Through the continuing efforts of four full-time staff members, the TPH Charitable Office has raised millions of dollars for various charities across Canada. In 2005, and again in 2006, TPH received the CIBC Spirit of Leadership Community Award.

Earle and Janice O’Born are active supporters of Sick Kids Hospital and, in May 2007, were awarded the Outstanding Philanthropists Award by the Children’s Circle of Care Woodmark Group. In May 2009, the O’Borns co-chaired the Brazilian Ball, which raised over $2.9 million in net proceeds donated to Sick Kids Hospital. In 2010, Earle and Janice O’Born were recipients of the Canadian Centre for Diversity’s Human Relations Award.

Mr. O’Born’s achievements will be recognized by leaders of Canada’s printing industry during PrintAction’s Canadian Printing Awards gala, taking place on the first evening of the Graphics Canada trade show in Toronto, November 10.