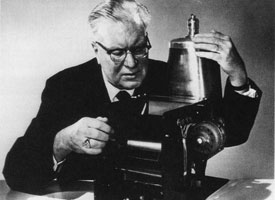 Chester Carlson, the inventor of Xerography, has been inducted into the Paper Industry International Hall of Fame. He was honored for his process of plain paper copying that
revolutionized communications.

The hall of fame recognizes individuals who, through their inventions,
initiative and efforts, have helped the world’s paper industry flourish.Previous inductees included Johann Gutenberg and Kimberly-Clark Corp. founder John A. Kimberly

Carlson patented
the copying concept in 1937, and in 1944 teamed with the Battelle
Institute in Ohio to develop the technology. In 1947 he formed a
licensing agreement with the Haloid Corporation (which later became
Xerox Corporation). The world’s first plain paper copier, the Xerox 914,
was launched in 1959.

According to Xerox, in 1955, four years before the introduction of the Xerox
914, 20 million copies were made worldwide; in 1964, five years
after the Xerox 914 was introduced, 9.5 billion copies were made
worldwide, almost all xerographic. That number grew to 550 billion
copies in 1984, and today trillions of copies are made around the world
each year.

The inspiration for a copying machine came to Carlson while he was in law school, forced to copy books longhand because he could not afford to purchase them. He had a bachelor’s degree in physics from California Institute of Technology and also obtained a law degree from New York Law School in 1939. He died in 1968 in New York City.