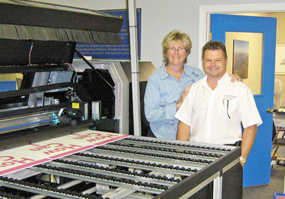 Peterborough-based SIGN-A-RAMA, which is part of a global network of over 900 stores, boosts its signage production with the addition of an HP Scitex FB950 and the launch of its new Citibanner program.

SIGN-A-RAMA was founded in 1986 by Ray and Roy Titus. After opening their first store in Farmingdale, New York, and a second in North Palm Beach less than a year later, the company began offering SIGN-A-RAMA franchises in late 1987.

In conjunction with the HP Scitex FB950 installation, SIGN-A-RAMA this month launched its Citibanner program, which the company describes as “a turn-key solution for light pole banner advertising, branding and beautification.” The program provides consultation, design, banners and installation for clients like municipalities, universities and colleges, car dealerships, retail, casinos and hospitals.