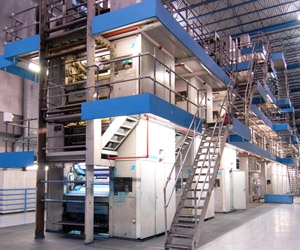 The February 19 asset auction is to feature a 50-inch Man Roland Colorman S press line that was initially installed for more than $80 million.

The Kennedy Heights printing plant of Surrey, British Columbia, which opened in 1997 at a cost of around $150 million to print the Vancouver Sun and The Province newspapers, shuttered its operation on the last day of January.

Assets of the 200,000-square-foot plant, which had the capability to operate at speeds of up to 80,000 copies an hour and with up to 160 pages in 10 sections, are to be auctioned on February 19. All of the equipment is scheduled to be removed from the facility by March 13. This includes a line composed of four interlinked double-wide, 50-inch Man Roland Colorman S presses initially installed for more than $80 million.

In addition to dozens of reels and stackers, and a significant amount of postpress equipment, the facility’s complete stores and spare parts inventory, such as bearings, motors and drives, is valued at more than $1.5 million.

As previously announced, the Vancouver Sun will now be printed by TC Transcontinental Printing’s Vancouver-area facility. This agreement spans five years and, according to Transcontinental, does not require any further capital investments. In late 2013, Transcontinental also reached an agreement with Postmedia Network Corporation to print the Calgary Herald newspaper.

Postmedia at the time announced plans to sell two of its real estate holdings responsible for producing three of its newspapers: Calgary Herald, The Province and Vancouver Sun. According to Global News, The Province will now be printed by Black Press Group Ltd.

In May 2014, Transcontinental Printing also announced a multi-year agreement with Postmedia Network to print The Gazette newspaper, which is published Monday to Saturday, primarily for the Montreal market.

“We continue to benefit from our outsourcing offering as publishers express interest in our solution. We are actively pursuing additional outsourcing opportunities in the Canadian market,” stated Brian Reid, President of TC Transcontinental Printing, at the time of The Gazette contract agreement.

Global News produced a video report about Kennedy Heights plant shut down, detailing the final time that the Vancouver Sun and The Province were printed in the facility. Global News reports the shutdown results in the loss of 220 jobs.