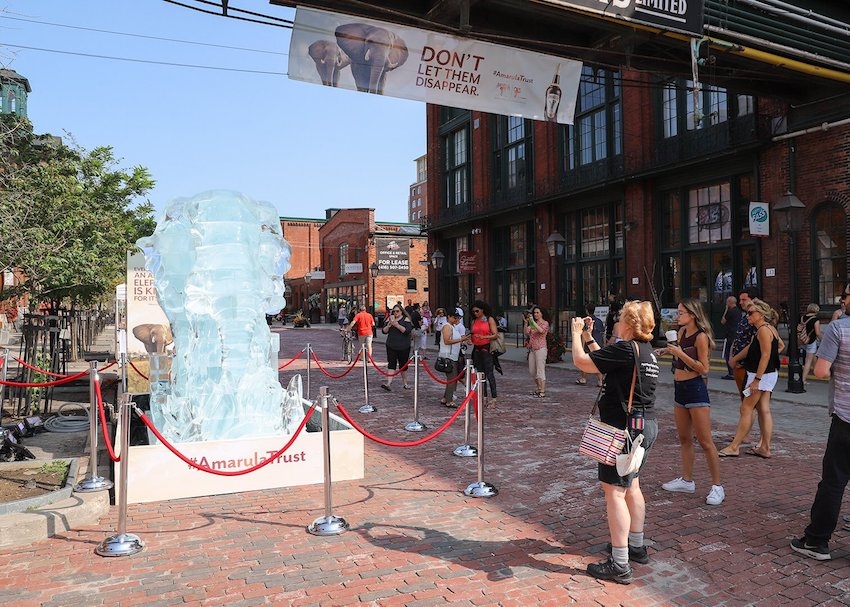 Earlier this year Amarula Cream Liqueur released a special edition bottle collection with its well-known elephant branding individualized by HP Indigo digital printing. The first stage of the ‘Name Them, Save Them’ campaign raised awareness of the African elephant as an endangered species by letting consumers visit a virtual African savannah where they could design and name a one-of-a-kind African elephant. In turn, these consumer-produced designs were used to decorate individualized labels on 400,000 Amarula bottles — one bottle for every African elephant still surviving in the wild.

“Individualizing Amarula bottles is a powerful way to reinforce the message that every elephant is an individual with a unique personality,” said Saramien Dekker, Global Marketing Manager for Amarula. “This campaign is about creating a connection between humans and elephants, and becoming actively involved in raising awareness and saving our elephants.”

In partnership with conservation group WildlifeDirect, Amarula recently launched its latest campaign initiative, ‘Don’t Let Them Disappear,’ in countries around the world, including South Africa, the United States, Brazil, Germany and Canada. On August 12, World Elephant Day, a life-sized elephant ice sculpture – consisting of roughly 103 blocks of ice and weighing an estimated 9,344 kilograms – appeared in Toronto’s Distillery District. Over the course of the day the ice sculpture slowly melted in the summer heat, symbolizing the rate at which African elephants are being killed for their ivory.

A week prior to World Elephant Day, the @AmarulaElephant Twitter account and hashtag #AmarulaTrust launched, giving a voice to the elephant ice sculpture so it can share its story and spread the word about the disappearance of its brothers and sisters in Africa in real time, before disappearing itself.

The liqueur company’s wildly popular, global campaign on African elephant preservation and protection is a testament to the brand’s effective marketing tactic, promoted through a mixed media campaign supported by personalized packaging, print and digital communications, and a swift social media strategy.

Branding not only drives consumer sales, it also serves as a powerful company differentiator. A recent Cone/Porter Novelli Purpose study found 77 percent of survey respondents feel a stronger emotional connection to purpose-driven companies over traditional companies, while 78 percent believe companies must do more than “make money” — they need to positively impact society as well.

“In fact, companies that lead with purpose will stand to build deeper bonds with existing consumers, expand the consumer base and enlist those brand advocates to share the brand message,” states the research report.

A July 2018 article published by Kantar TNS, a U.K. research and market information group, looks at how brands can inspire trust in today’s evolving environment with the three i’s framework: Integrity, identification and inclusion.

“The concept of trust has usually been associated with stasis more than change. It brings up images of age-old, time-tested, large, solid brands and organizations with large and loyal user bases,” Anjali Puri, Global Director, Qualitative Offer and Expertise, at Kantar Insights Division, writes.

She describes the perception of integrity as “doing what you promise, and owning and making up for it when promises are broken.” Identification, she explains, is the ability to have access to one’s real, authentic self; for brands, this means creating a human face to represent the set of values it stands by.

Inclusion, the final ‘i,’ rests on building a sense of kinship, whether by virtue of being family, community, country or even people with shared values, Puri writes. “At its best, inclusion means that the brand cedes some control to its customers, and asks them to invest something of themselves in the brand’s world. We trust our kin because they are an extension of us – we are invested in them.”

As Steve Jobs once famously proclaimed, “A brand is simply trust.”

This editorial was originally published in the September 2018 issue of PrintAction, now available online.