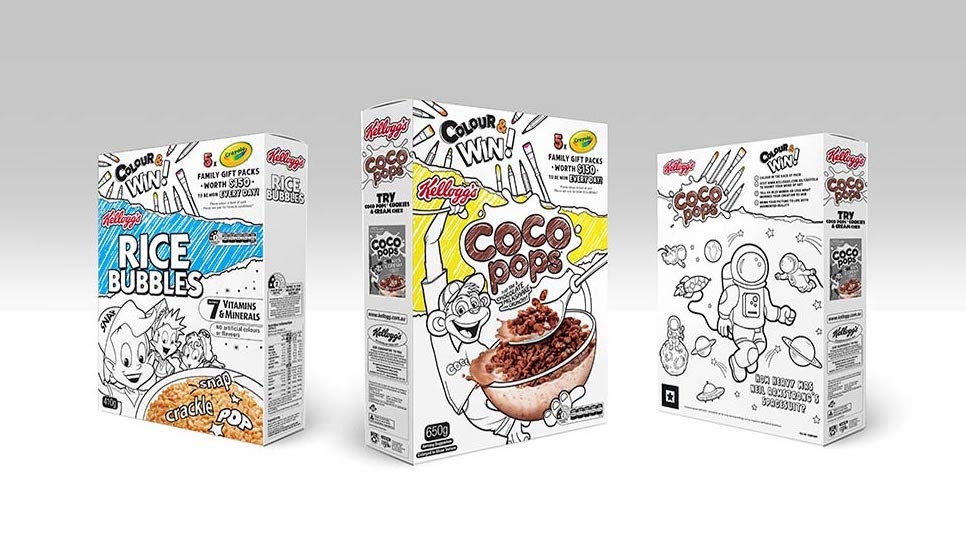 Kellogg’s Australia has released limited-edition black-and-white cereal boxes, encouraging customers to colour in the packs for a chance to win a Crayola gift prize. As part of the competition, entrants can watch their pictures come to life through an augmented reality portal on their mobile devices.

Augmented reality’s ability to create impactful experiences has the potential to revolutionize the way we interact with the world around us. Author and keynote speaker Bernard Marr describes AR as a technology where digital information – such as audio, graphics and animation – is superimposed onto the real-world environment.

“Rather than provide a fully immersive virtual experience, augmented reality enhances the real world with images, text, and other virtual information via devices such as heads-up displays, smartphones, tablets, smart lenses, and AR glasses,” he writes in his 2019 Forbes article. Seen as bridging the gap between the digital and physical worlds, the technology has a broad range of applications, such as enriched advertising opportunities, mesmerizing video game experiences, and improved healthcare education, among many others.

A new partnership between Kellogg’s and Crayola aims to get consumers to interact and engage with their brands in a different way. The multinational food manufacturer has released limited-edition black-and-white cereal boxes in Australia, encouraging customers to colour in the packs for a chance to win a Crayola gift prize. As part of the ‘colour to win’ competition, entrants are asked to submit their works through an AR portal on their mobile device, and watch their pictures come to life.

In a sea of brightly coloured packages vying to catch the attention of shoppers, the cereal boxes have opted for a monochromatic approach that invites consumers to share their own creativity.

“Redesigning the packs of such an iconic brand was a real privilege and the trust Kellogg’s gave us to go as minimal as possible was great validation of the idea,” says Nate Martin, Creative Director of creative agency Kinetic, who worked on the campaign. “We’re intrigued to see how consumers interact with the campaign and are proud to be delivering one of the first instances of in-browser augmented reality for a [fast-moving consumer goods] brand.”

“We’re particularly delighted to be partnering with Crayola for this campaign,” Kellogg’s Senior Shopper Activation Manager Felicha Hogan says. “As a first for Kellogg’s we’ve been able to strip the colour from our packs and hero our distinctive assets, whilst making sure shoppers can still find us on [the] shelf.”

In a 2018 interview with Adweek, Bryn Mooser, co-founder and then-CEO of Ryot Labs, said the near future of ubiquitous self-driving cars and smart displays will create all-new scenarios for consumers to entertain or inform themselves. “The camera on the back of the cellphone is the most important innovation in media since the printing press,” he said. “You can record your own stories, you can see what’s going on in the world, and you can also create this augmented reality world around you.”

A number of brands have recently experimented with AR-print integration. Madame Tussauds London last year introduced an AR-enabled guidebook that, when activated, unlocked a series of behind-the-scenes videos so visitors could see how the wax models were made.

Launched in fall 2017, the Ikea Place app lets customers see how its more than 2,000 furniture items would look and fit in their homes. Its first interactive experience was released in 2013 as part of the Ikea Catalogue app; an AR feature allowed potential buyers to place and view furniture items in their rooms, with a copy of the print catalogue placed in frame to help calculate the scale.

Meanwhile, the front and back covers of the May 2016 issue of The New Yorker featured the work of illustrator Christoph Niemann which could be animated using an AR app, a first for the American magazine. Through a smartphone or tablet, readers could bring Niemann’s illustrations of a subway car and city skyline to life, as well as several AR-enabled ads, transforming static print pages into an interactive experience. Similarly, the May 2016 issue of Ellegirl Japan created unique reader experiences as the first magazine in Japan to be linked entirely to an AR app. Readers could turn themselves into a virtual Ellegirl model, putting themselves on the cover of the issue by uploading a selfie, as well as watch fashion tutorials.

“Marketing in the information age is much more of an ‘experience,’ thus pushing out former methods that were static and less interactive. AR is allowing content to not be held prisoner to paper and screens,” writes Augment, an enterprise AR platform, in a 2016 blog post.

As brands strive to create innovative and captivating engagement opportunities, there’s no doubt AR will become an increasingly significant component of the cross-media experience.

This column was originally published in the July/August 2019 issue of PrintAction, now available online.