Baseball great Ferguson Jenkins spent his 68th birthday touring The Lowe-Martin Group during the press run of his new stamp to be issued by Canada Post on the first day of February. 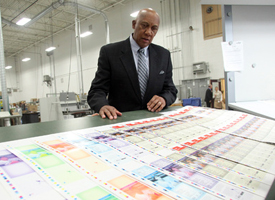 Considered by many to be the greatest Canadian baseball player of all time, Jenkins was inducted into the Baseball Hall of Fame in 1991. He remains the only Canadian to be a member of the Hall.

Over his 19-year pitching career from 1965 to 1983 (primarily with the Chicago Cubs), Jenkins was a three-time All-Star and the 1971 NL Cy Young winner. He earned 49 career shutouts and holds the 12th highest strikeout total in Major League Baseball history (3,192).

The Fergie Jenkins postage stamp is to be issued on February 1, 2011, as part of Canada Post’s Black History Month series. Lowe-Martin produced the stamp in its Ottawa-based facility within a 7-colour (plus varnish) process. Canada Post will issue 4-million Jenkins stamps, as well as another 1.4-million stamps featuring writer Carrie Best, in the Black History Month series.

Describing the stamps, designer Lara Minja of Victoria-based Lime Design, notes: “The determination, strength, integrity and pride of Fergie Jenkins and Carrie Best are the attributes I aspired to bring to these stamps. The design balances a more recent depiction with an image from the past.

“A photograph of a more mature Jenkins is overlapped by an image of him on the pitcher’s mound. Carrie Best smiles warmly in her portrait, sitting opposite an image of herself reading the newspaper she established. Both stamps incorporate Order of Canada icons, as well as the names and signatures of Jenkins and Best to personalize the design.”