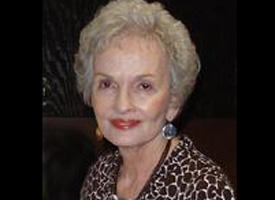 Mary Phillips Hadfield, Co-founder of Kwik Kopy, passed away at her home near Tomball, Texas, on November 26, 2013. She was 83.

Hadfield was born September 26, 1930, in Hancock, Michigan, but grew up in Waco, Texas, moving to Houston in 1954 after graduating from Baylor University.

Four years later, she met her eventual husband and business partner, Bud Hadfield. The two wed in 1960 and were married for 50 years until Bud’s death in 2011.

In 1967, Bud and Mary Hadfield together launched Kwik Kopy Corporation, which is now one of the world’s largest quick-printing franchises. According to the company, Mary proposed the name and design for Kwik Kopy, which Bud initially dismissed as “corny.”

Mary Hadfield primarily served as event planner, editor and interior decorator overseeing the Kwik Kopy brand. At her death, Mary was president of ICED, which is the parent company under which Kwik Kopy currently operates.