Warner TenKate, owner of Accell Graphics, suddenly passed away on December 14 at the young age of 48. 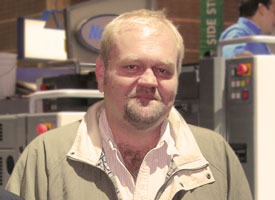 Accell Graphics was founded in London, Ontario, in 1985, and now employs over 35 staff members. Over the past few years, TenKate had been driving his company to become one of Canada’s most environmentally progressive commercial printers. In 2007, KenKate received the inaugural Agfa Environmental Recognition Award. More recently, Accell was named as one of the official printing suppliers for the upcoming 2010 Winter Olympic Games in Vancouver.

Beyond its environmental push, Accell Graphics is a highly respected company within Southern Ontario’s tight-knit printing community, as TenKate was also an early adopter of technologies for variable-data and large-format printing. In addition to the Accell’s offset base, the company also holds a large bindery and in-house design.

Friends will be received at the Bieman Funeral Home, Dorchester, on Thursday between the hours of 7:00 and 9:00 pm.