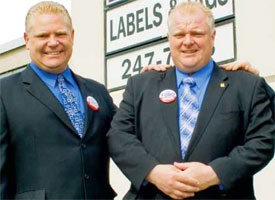 After more than 10 months of campaigning, voters of Toronto have spoken and printer Rob Ford has been named to lead the city for the next four years. Ford handily beat rival George Smitherman by a margin of 11 percent, winning 47 percent of the vote.

“Toronto now is open to business, ladies and gentlemen,” announced Ford at last night’s celebration at the Toronto Congress Centre. “But this is just not my victory, but a victory for every single person who lives and works in this great city of Toronto.”

Rob Ford has been city councilor for the past 10 years and is known widely for his stances on fiscal responsibility and small government. Ford’s campaign largely centered around these issues, going against the policies of Toronto’s current mayor, David Miller.

Ford will take office on December 1 and will become the third mayor of Toronto since amalgamation in 1998.

Read the July 2010 story about the Ford family by Victoria Gaitskell.