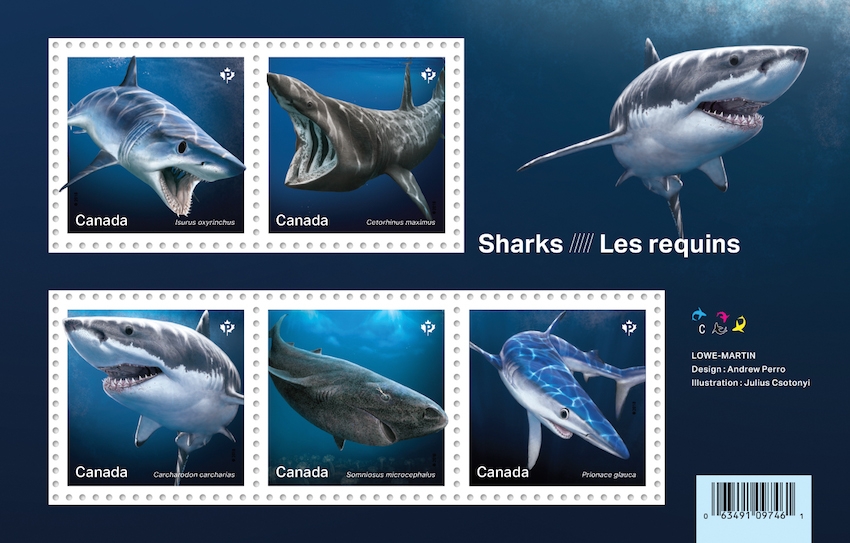 Unveiled July 12 at the Vancouver Aquarium, the stamp set highlights five of the nearly 30 shark species native to Canadian waters or are known to visit our shores. Between 400 and 500 shark species inhabit the world’s oceans and waterways, Canada Post notes.

• The blue shark is native to the Atlantic and often spotted around Newfoundland, the Bay of Fundy and the Gulf of St. Lawrence.
• The shortfin mako is the fastest shark in the world. It hits speeds up to 50 kilometres an hour, usually when attacking. A visitor to Canada, the Grand Banks off Newfoundland, along the Scotian Shelf, is the northernmost edge of its migratory range.
• The basking shark glides through the ocean open‐mouthed, feeding on krill, plankton and fish eggs. This gentle giant has been assessed as endangered (Pacific population) and as a special concern (Atlantic population) by the Committee on the Status of Endangered Wildlife in Canada (COSEWIC).
• The white shark, a threatened species, has seen its numbers decline significantly in the Northwest Atlantic Ocean.
• The Greenland shark lives deep in the Arctic and North Atlantic Oceans. One of the longest‐living vertebrates, some have reached 400 years old.