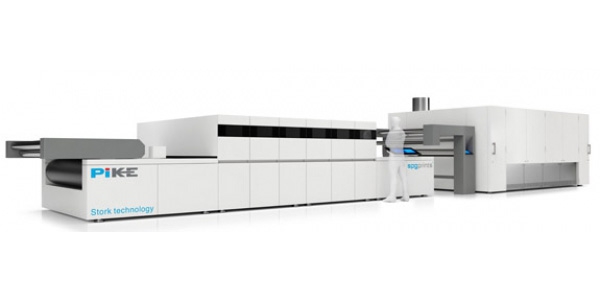 The first Pike will be a 6-colour machine with plans for including up to nine colours.

SPGPrints demonstrated a prototype of its new single-pass textile printer, called Pike, scheduled for launch at ITMA 2015 in Milan, this coming November. The company showcased Pike over a 2-week period at its headquarters in Boxmeer, Netherlands.

Pike is based on a full-width array of Fujifilm Samba print heads, which have been modified for textile printing. The heads are incorporated in what SPGPrints describes as a user-friendly print-bar technology, called Archer.

SPGPrints explains one key advantage of Archer technology is that it can accurately jet inks across a distance greater than print heads used in most current textile-printing systems. The head plates in the Archer array are typically 4-mm away from the surface of the substrate, compared with the traditional 1.5-mm distance of other print heads. SPGPrints has also developed Pike Reactive inks as a formula that helps to eliminate misting problems that might have arisen with Archer’s greater firing distance.

The first Pike printer will be a 6-colour machine in which each colour is represented by an Archer print bar containing 43 print heads, resulting in a printing width of 1,850 mm. The print bar has a native resolution of 1,200 x 1,200 dpi, variable drop sizes from two to 10 picolitres and a jetting frequency of 32 kHz.

These firing specifications together deliver typical productivity of 40 linear metres per minute (mpm), with a maximum of around 75 mpm. The modular construction of Pike will allow models with up to nine colours. Wider versions of Pike, up to 3,200 mm, are also planned.

The Archer print bar, explains SPGPrints, has been designed to retract fully for easy maintenance, whereby heads can be purged in narrow segments and a faulty head can be replaced by users in less than an hour – with no need for manual alignment. SPGPrints initially plans to provide customers with a number of spare heads and any faulty heads returned will be replaced free of charge.

“We researched what users want in the next generation of digital textile printing technology and discovered that the essentials include solid blotches, fine geometrics and – above all – a robust industrial solution,” said Jos Notermans, SPGPrints’ commercial manager for digital textiles. “That’s what the Pike delivers, at high speed and with low, predictable costs.”

Pike’s fabric-infeed system is by Erhardt + Leimer and the transport blanket has been designed in conjunction with Habasit. The in-line dryer has extra capacity to handle disperse inks, which – along with acid inks – are in development and scheduled for launch in 2016.