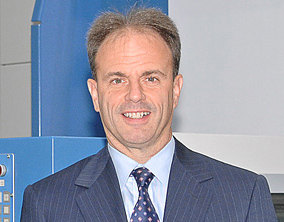 Thomas Quinlan III, President and CEO of RR Donnelley & Sons Company, is to participate in a fireside chat with EFI’s CEO, Guy Gecht, at the upcoming EFI Connect Users’ Conference taking place from January 20 to 23 in Las Vegas.

“It will be a privilege to hear from the chief executive of a legendary organization that has thrived over its 150-year history and continues to lead as the largest company in our industry,” said Gecht. “Connect attendees will be inspired to hear Tom’s personal and professional story and learn how both he and RR Donnelley have been able to adapt as the industry goes through significant changes.”

Appearing at number 268 on the Fortune 500 listing of the country’s largest corporations, Quinlan’s company, RR Donnelley, is often described as the world’s largest graphic communications firm, with approximately 65,000 employees, annual revenues of nearly $11.5 billion, and more than 500 locations around the world. RR Donnelley is also one of the largest users of EFI products, with hundreds of EFI MIS/ERP and Web-to-print software, EFI Fiery servers and EFI VUTEk printing systems installed across its global locations.

From 1994 until 1999, at World Color Press, Inc., Quinlan served in various finance capacities, including as Senior Vice President and Treasurer. He has previous finance and treasury experience at Walter Industries, Marsh & McLennan and Kidder Peabody.

Quinlan’s EFI Connect conference general session is to take place January 21 at 8:30 am at The Wynn Las Vegas.

EFI Connect 2015 will also include more than 200 educational sessions on business management, sales, marketing and production technology for users of EFI products.