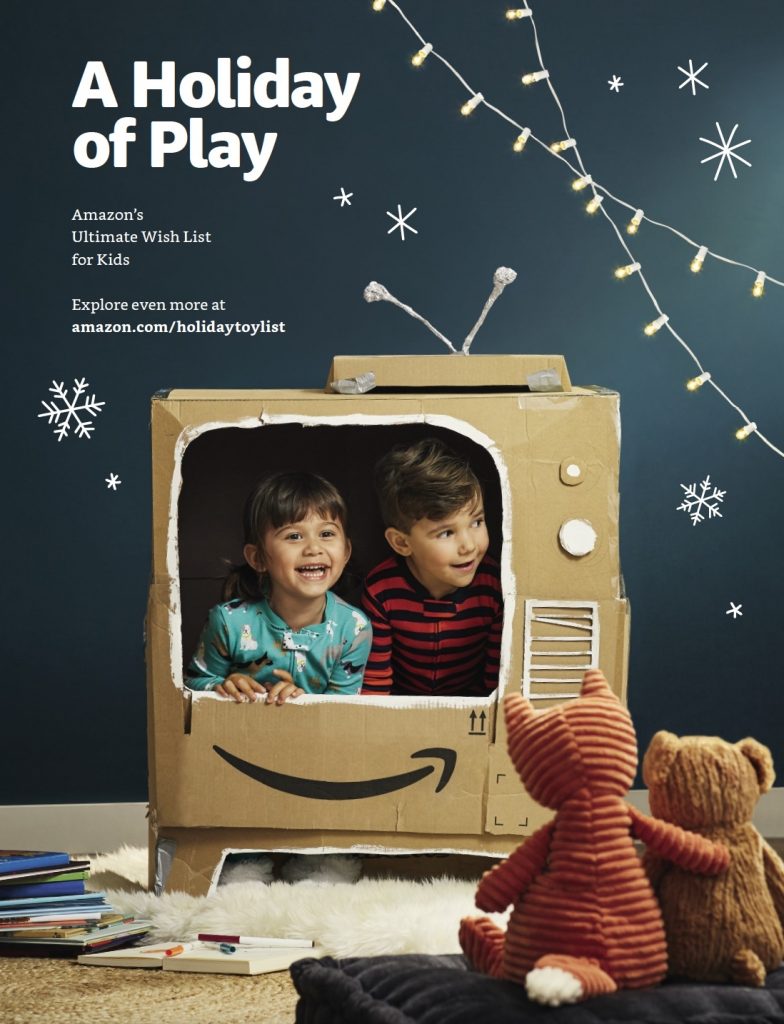 Amazon’s new printed holiday toy catalogue A holiday of play is now being mailed to U.S. households and handed out at Whole Foods Market locations.

Sears, Roebuck and Co., commonly known as Sears, was once the world’s largest retailer. Often credited for driving consumer culture over its 130-plus-year history, the company began as the R.W. Sears Watch Company in 1886 and published its first mail-order catalogue in 1888 to advertise watches and jewelry. Over the years, the catalogue expanded to showcase the breath of its merchandise, such as sewing machines, musical instruments, bicycles, sporting goods, firearms, baby carriages, and men’s and children’s clothing.

In 1933, Sears added the Wish Book, an annual holiday gift guide, to its array of mailed materials. The 87-page catalogue showcased 25 pages of toys and 62 pages of gifts for adults, including Miss Pigtails dolls, a Mickey Mouse watch, fruitcakes, Lionel electric trains and live singing canaries. Fast forward to 1968 – the iconic guide totalled 605 pages, with 225 pages devoted to children’s toys and 380 pages to gifts for adults.

While Sears retired the Wish Book in 2011 in an effort to focus on online sales, the company astonishingly announced in October 2017 it would bring the guide back for the season due to overwhelming customer demand.

“Our members told us they missed the Wish Book, so we had to bring it back, but in a special way that lets you share more joy wherever you are,” Kelly Cook, then-Chief Marketing Officer for Sears and Kmart, said.

Earlier this year, news outlets reported Amazon.com Inc. would go conventional and publish a printed holiday toy catalogue ahead of the holiday season, instead of relying on all-digital advertising. Taking a page out of the traditional marketing playbook, the catalogue, A holiday of play, is being mailed this month to U.S. households and handed out at Whole Foods Market locations, the grocery chain Amazon bought last year, Bloomberg reported.

The strategy would represent another move from the e-commerce giant to incorporate classic engagement tools used by brick-and-mortar stores, perhaps capitalizing on the recent closure of U.K. and U.S. operations of Toys “R” Us.

Multi-channel shopping and buying is on the rise, and today’s savvy retailers understand that customers who use more than one of their channels are the most valuable, brand leadership author Denise Lee Yohn notes.

“Nordstrom reports that customers who have a multi-channel relationship with the brand spend four times as much as those who do not. Bonobos shares similar results, with Craig Elbert, vice president of marketing, reporting that 20 percent of the website’s first-time customers are placing their orders after having received a catalogue and are spending one and a half times as much as new shoppers who didn’t receive a catalogue first,” she writes in Why the print catalog is back in style in Harvard Business Review.

A 2015 Canada Post survey found that 40 percent of consumers who receive printed catalogues keep them for at least a month, while 20 percent say they keep catalogues for at least four months.

After nearly a decade of not publishing a print catalogue, Canadian Tire decided to launch the Wow Guide in April 2016, an impressive 200-page catalogue that was mailed to 12 million homes across the country. Designed to integrate the digital and print media, the catalogue required customers to download the retailer’s mobile app and use their smartphone or tablet camera to hover over the pages for additional content, such as how-to videos or to check product inventory, for example.

In a 2016 interview with Media in Canada, TJ Flood, then-Senior VP Marketing at Canadian Tire, explained the “paper catalogue had to be the gateway to a robust digital representation.”

And it appears it worked. Michael Medline, CEO at the time, said the company saw its weekly e-commerce transactions double following the mailout, describing it as “the single biggest impact lever we have ever pulled to generate more online sales.”

For many, the printed catalogue, especially those filled with the latest must-have toys, gadgets and holiday whimsy, evokes a sense of nostalgia and comfort.

“There was something magical triggered in our brains when as a child we received that giant catalogue in the mail, or even by the few pages of toys in the back of the Sears catalogue,” writes contributor Curtis Silver in a July 2018 Forbes article. “Kids, as inundated as they are in their handheld technology, still like to flip through a book full of nothing but toys. We are still somewhat interested in the physical visual media, not totally overtaken by the digital world just yet.”

As a recent Canada Post blog explains, “A catalogue is a tangible presence that’s available at the moment of truth — when a shopper is considering a purchase. A convenient, inspiring source of reference to enjoy during a peaceful moment in an otherwise busy life. It presents so many opportunities for brand engagement.”

This editorial was originally published in the November 2018 issue of PrintAction, now available online.