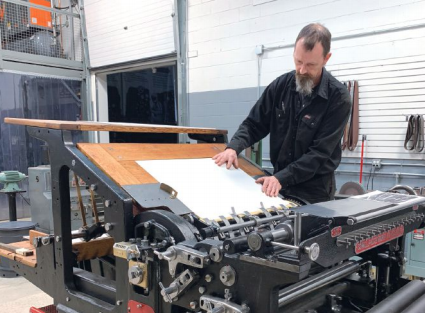 Uniform world standards matter. Partisan and national pride, when blocking the path of progress, stifles efficiencies which in turn eats away at free enterprise’s role as innovators that can lead to constantly lowered costs.

Back in 1986, I was in the midst of another Heidelberg offset installation, way out west in the pretty little town of Woodinville, Washington State. As every mechanic will tell you, challenges are just part of the job when you’re out of town. Woodinville was no different. No, it wasn’t the surprise of seeing the wall feet from the press receive a massive hole; the next-door occupants were in the broadloom business and to move large rolls of carpet, they used a forklift with a specially mounted steel pole, something similar to a jousting lance. The operator misjudged the distance and all of a sudden, the drywall exploded with this pointed pole inches from where I was working.

I had another problem — one that was rather frequent in a country that still refused to go metric. I needed a few 6-mm hex bolts. Such a simple request could have been as easy as running down to a local hardware store if I was anywhere other than the United States. In 1986, unless businesses ordered fasteners from a specialist metric supplier, there were none. In larger printing plants, the maintenance departments usually had assortment kits but generally guarded these as if they were Lady Aster’s jewels. Since the area was new to me, I did the next best thing and went to a Volkswagen dealership, paid a princely sum and solved the problem.

Our museum has just completed a restoration of a Heidelberg stop-cylinder press which was manufactured in 1920. The press is known as the Schnelläufer-Exquisit (fast press) and is handfed in a 70- cm sheet size. But if you need any hardware, be in for a surprise. All threads and nut/bolt faces are English Whitworth, not metric. This proved to be a bit of a puzzle since the DIN metric profile, developed in Germany in 1919, came about well before 1920 when the German, Swiss and French established the Système Internationale (SI) in 1898.

In 1841 Joseph Whitworth, the legendary English toolmaker suggested standardizing threads. Since the invention of the screw, hundreds of profiles have existed and were often made in-house by machine factories. We constantly run across some very odd sizes and pitches in our restoration of pre-1850 machinery. Whitworth chose an angle of 55 degrees and standardized the number of threads per inch, fixed for various diameters. It is considered a credible fact that Frederich Koenig, upon leaving England for Germany in 1817, took with him English tooling and at least one Whitworth lathe. Such was the quality and acceptance of the Whitworth name. 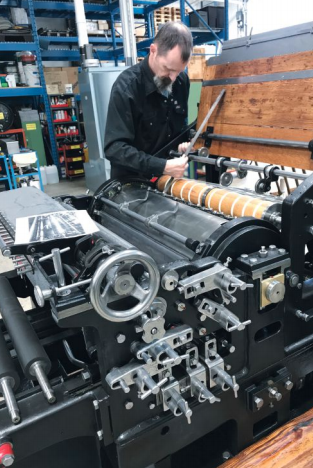 However, Whitworth threads were difficult to cut as they featured a flat milled surface at the top of the thread. In 1864 an American, William Sellers, came up with what would become the American-Uni fied-Course Series (USS). This thread had a 60-degree angle, similar threads per inch as Whitworth but a sharply pointed thread that was much faster to manufacture. In 1948, Britain, the U.S. and Canada agreed on a new standardization for threads using the Imperial measurement — Unified-National-Standard or UNC. The reason UNC surfaced was due to major “tower of babel” bottlenecks during the Second World War. Machinery, armaments, and vehicles manufactured in these three countries would run into trouble when repairs had to be made. For example, a British tank with Whitworth threads breaks down at a Canadian frontline and all the Canadian bolts don’t fit!

Although the metric system of sheet size and thickness was prevalent before 1919 Europe, changing tooling and specifications just to suit the new system was incredibly expensive. Whitworth’s specifications had spread throughout Europe, and Germany was becoming the juggernaut of machine building. Tooling cost money which few companies, including Heidelberg, had available just after the First World War. Every printing press we have worked on, some built as late as 1930, used imperial hardware and that includes Koenig & Bauer, Johannisberg, Mailänder and Planeta. These printing presses used British threads, but our museum also has a 1927 Heidelberg Platen, and we do know that between 1920 and 1926, Heidelberg did adapt to the metric system.

Why are toolboxes so heavy?

To mask the fact Europe was still maintaining an imperial unit for hex bolt and nut faces, odd sized wrenches appeared with a metric identification, and sometimes with applicable fractions, to accommodate the use of the Whitworth size. Metric hex bolt face sizes of 14, 16, 18, 20, 25 millimetres (now obsolete), were conversions from Whitworth. For example, early German wrenches would sometimes be stamped 25 mm and 9/16 inches. If by chance a fine thread was used (BSF) that same bolt would have a completely different wrench marked 5/8 inches — Whitworth, for some reason altered the faces from course (BSW) to fine (BSF). To make matters worse, various European countries, as well as the United States, developed their head sizes which meant mechanics needed more tools to lug around.

In Japan, the situation wasn’t much different. A 1928 Komori press in our museum is not only manufactured to Imperial measurements but all the fasteners are Whitworth. When Germany and its neighbours, tired of the heavy English threads and bolt faces, eliminated the irritant and then went completely metric. Metric bolts maintained the American 60-degree angle but altered the thread pattern towards a slightly finer pitch.

Unusual thread patterns only added to the grief in the United States. Smyth bindery equipment didn’t use any typical threads and simple things, like screws, bolts and nuts, were all listed in their parts catalogue as unsuspecting mechanics would soon find out they were non-stock at most suppliers. I spent hours re-threading a hole to accept a standard thread for a Smyth case maker — frustrating and wasteful but potentially profitable for the manufacturer.

DIN’s other wide-reaching standards also had a profound effect on virtually everything else. Paint colour a good example. The RAL standard also came with a number. In the United States, they were still using catchword monikers such as “battleship Grey”; The Germans: RAL7003. Every shop in Germany made that colour the same.

Sorry… we can’t supply that!

“Non-standard” wasn’t isolated to just hardware, it included ball bearings as well. New Departure (now Hyatt-New Departure), was once owned by General Motors. During World War Two, ND manufactured 287 million bearings for the war effort and they went into everything from aircraft to tanks. As the war ended, New Departure came up with a novel annuity revenue stream. Various odd dimensions were designed into some New Departure bearings and if a manufacturer specified these bearings when it came time for a replacement, the customer could only purchase it through the same manufacturer as bearing suppliers couldn’t sell it. Our British friends are quite familiar with this money-maker as they had various firms, such as Hoffmann, knocking off unusual products only they could supply. Just as with a simple concept of standardizing a bolt, history shows what a waste in capital differentiation can mean.

Today, access to metric fasteners in North America has greatly improved. Hardware stores usually supply the most common items. Whitworth is still alive, mostly centred in the U.K. but specified for various items such as cameras. The threads make spinning on a nut much easier than metric or UNC. The marine and shipping industry often specifies Whitworth. Japanese metal shipping crates use Whitworth 1/2-12 hex bolts for some unexplainable reason. BSPT (British Standard Pipe Thread-Tapered) is also used extensively around the world, although Europe generally accepted the American NPT (National-Pipe Thread). Probably many of you have struggled to match electrical connectors with European hardware. That’s because of the PG standard created within the German DIN system. Panzergewinde is the name of these tapered threads and requires yet another set of taps few in North America even know about.

Ultimately if every bolt and bearing is simply defined by a single standard, “billions” of dollars could be saved along with endless hours of searching. There would be no need for multiple sets of taps and dies, drawers of wrenches, Allen keys and eye-watering SKUs of dissimilar stock. Ponder the benefits for paper and even lumber specifications — massive savings. Canada officially adopted the Metric system in 1970, but most Canadians my age weigh themselves in pounds and measure their height in feet and inches. Thousands of my fellow print industry mechanics have suffered from non-standardization for decades, perhaps our governments will finally do something about it.

This feature was originally published in the March 2020 issue of PrintAction, now available online.