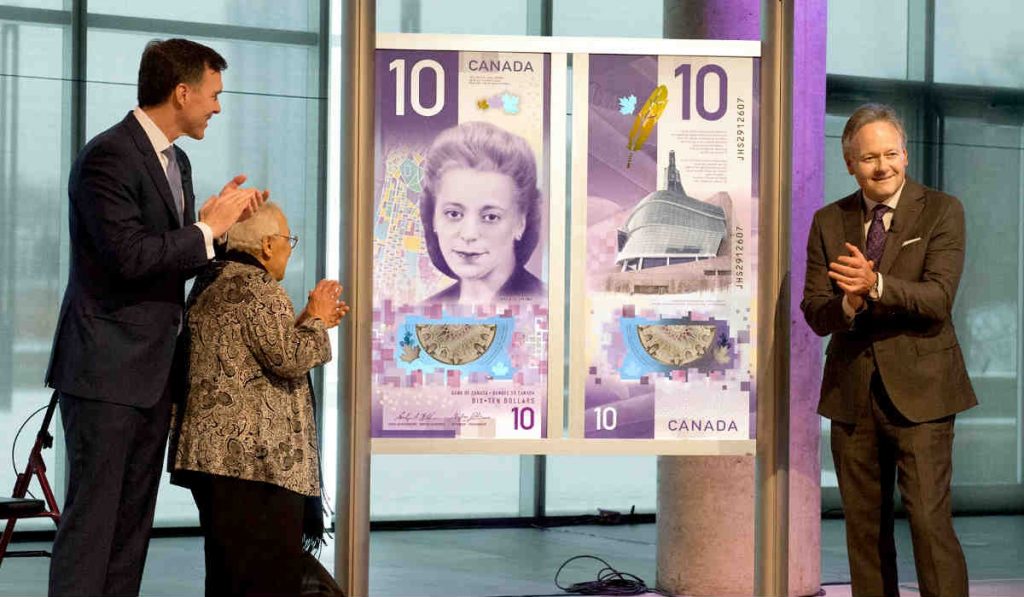 Once issued into circulation in late-2018, the new bank note will mark the first time that a Canadian woman is portrayed on a regularly circulating Bank of Canada note.

Viola Desmond was selected for the new $10 bank note by Minister Morneau following an open call to Canadians to nominate an iconic Canadian woman for the next redesigned bank note (See Notably Canadian below).

A successful Black Nova Scotian businesswoman, Bank of Canada explains Desmond refused to leave a whites-only area of a movie theatre in 1946 and was subsequently jailed, convicted and fined. Her court case, explains the Bank, is one of the first known legal challenges against racial segregation brought forth by a Black woman in Canada.

The new $10 note is the first vertically oriented bank note issued in Canada. This allows for a more prominent image of Viola Desmond, explains the Bank, and differentiates this new $10 note from its other current polymer notes.

“Two years ago today – on International Women’s Day – Prime Minister Trudeau and I announced that the time had come for a Canadian woman to be represented on Canada’s bank notes,” said Minister Morneau. “Since then, thanks in large part through her sister Wanda, more and more Canadians have come to know Viola Desmond’s remarkable personal story of courage and dignity.

“Her story serves as inspiration to all Canadians and acts as a powerful reminder of how one person’s actions can help trigger change across generations,” continued Morneau. “As we strive for equality across our economy and in every facet of our country, we hope this constant reminder of Viola’s story will help inspire a new generation of women, men, girls and boys to fight for what they believe, take their place and create a better future for themselves and all Canadians.”

Notably Canadian
The following article describes the process used by the Bank of Canada to choose Viola Desmond for the $10 bank note. It was first published in PrintAction’s March 2017 print issue:

The Bank of Canada will soon make a commemorative bank note available to mark this year’s 150th anniversary of confederation for the country, which has only seen three other such commemorative notes since the Bank was founded. In honour of the 100th anniversary of Confederation, a modified version of the 1954 $1 note was issued, bearing the date 1967. The centennial logo was added to the front of the note and a view of Canada’s original Parliament Buildings, destroyed by fire in 1916, was substituted for the prairie landscape that appeared on the original 1954 $1 note.

A commemorative $25 note bearing the date May 6, 1935, was issued in honour of the Silver Jubilee of King George V. Similar to the 1935 series. This denomination was available in either French or English. And finally, the Bank issued a commemorative bank note that is a variation of the existing $20 note in the Polymer series in late 2015 to recognize Queen Elizabeth II, whose image adorns the popular note, becoming the longest-reigning sovereign in Canada’s modern era.

Commemorative notes provide welcome press time for the Bank’s print suppliers and related service providers and the new 150th anniversary $10 note will soon be superseded by a new national milestone note in 2018. On International Women’s Day, March 8, 2016, Prime Minister Justin Trudeau launched a process for Canadians to help select who would become the first Canadian woman to have their portrait featured on a regularly circulating Bank of Canada note. The Twitter-fuelled #bankNOTEable campaign launched by the Bank yielded more than 26,300 submissions by April 15, 2016.

The #bankNOTEable push resulted in 461 eligible candidates, who had Canadian citizenship and had been dead for at least 25 years. An independent Advisory Council composed of Canadian academic, sport, cultural and thought leaders narrowed down the list to five candidates for consideration by the Minister of Finance.

In December 2016, Bank of Canada Governor Stephen Poloz announced that Viola Desmond will be featured on a new $10 note, expected in late 2018. Desmond, an icon of the human rights and freedoms movement in Canada, was selected from a short list of five iconic Canadian women by Minister of Finance Bill Morneau, in accordance with the Bank of Canada Act. A successful Nova Scotia businesswoman, Viola is known for defiantly refusing to leave a whites-only area of a movie theatre in 1946. She was subsequently jailed, convicted and fined. Her court case was the first known legal challenge against racial segregation brought forth by a Black woman in Canada.

The other short-listed women included Pauline Johnson, daughter of a Mohawk Chief and an Englishwoman, best know for the poetry she wrote celebrating her Aboriginal heritage; Elizabeth MacGill, the first woman in Canada to receive a bachelor’s degree in electrical engineering (University of Toronto, 1927) and a master’s degree in aeronautical engineering (University of Michigan, 1929); Fanny Rosenfeld, who held Canadian records in the running and standing broad jump and in the discus; Idola Saint-Jean, primarily known as a feminist and pioneer in the fight for suffrage in Quebec; and Pitseolak Ashoona, an Inuit graphic artist known for prints and drawings showing.

“Many extraordinary women could have been on this next bank note, and the search and decision-making process were extremely thorough,” said Minister of Status of Women Patty Hajdu. “The choice of Viola Desmond reminds us that Canada is a diverse country where everyone deserves equality and respect.” Minister Morneau said, “Viola Desmond’s own story reminds all of us that big change can start with moments of dignity and bravery. She represents courage, strength and determination—qualities we should all aspire to every day.”

This new Viola Desmond $10 note, explains the Bank of Canada, reflects the broader themes of social justice and the struggle for rights and freedoms. It will be the first note in the next series. To continue to celebrate more iconic Canadians, the next $5 note will also feature a new Bank NOTE-able Canadian, launching another consultation process to seek input from Canadians.

Canada’s first Prime Minister, Sir John A. Macdonald, and our first francophone Prime Minister, Sir Wilfrid Laurier, will be honoured on Canada’s higher-value bank notes. This change will take place when the higher-value notes are redesigned for the next series. These changes mean that former Prime Ministers William Lyon Mackenzie King and Sir Robert Borden will no longer be portrayed on bank notes. The $20 denomination will continue to feature the reigning monarch.