Walmart Canada has launched a new, free glossy magazine, including a 100-page first issue, produced by Rogers Media’s Custom Content division. The new magazine, called Walmart Live Better, is to be produced as a 1-million-copy run six times a year.

Walmart Live Better arrives shortly after one of the company’s largest retail competitors, Target, opened up 24 outlets across Southern Ontario (by late March). Walmart executives overseeing the project are downplaying the timing of the magazine’s launch relative to Target Canada’s arrival as “coincidence,” but clearly the world’s largest retailer has decided to lean on the use of high-quality print. 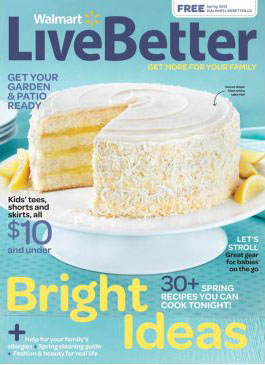 The free publication is available as of April 8 at all of the Walmart Supercentres in English Canada, as well as through a dedicated Website and mobile versions. Walmart claims 8-million Canadians visit its stores each week.

“Giving this magazine to our customers for free is another way for Walmart to say thank you to the millions of Canadians who shop with us every week,” stated Emma Fox, Walmart Canada’s Chief Marketing Officer. “The Walmart Live Better magazine fully delivers on our brand promise of Save Money. Live Better. We know that our customers’ needs extend beyond price. They are continuously on the look-out for everyday inspirations to help them and their families live better.”

The launch of Walmart Live Better has been covered in Canada’s largest daily newspapers, including:

The Globe and Mail, Rogers and Walmart to launch magazine