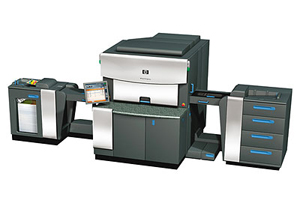 HP plans to run some of its most-recent Indigo press models at PRINT 09, including the W7200, 7000 and 5500 models. With the first North American installation in August 2009, the new HP Indigo W7200 (built around a dual-engine design) has the ability to reach speeds of 240 letter-size, 4-colour images per minute or 960 letter-size monochrome images per minute.

The roll-fed press is rated to produce up to 7.5-million letter-size colour images, or 30-million monochrome letter-size images, per month. The W7200 has an image size of 317 x 980 millimetres, while handling substrate weights ranging from 40 gms to 350 gms.

At PRINT 09, HP also plans to highlight its recent SmartPlanner 3.0 release, which includes job estimation – that considers printing, finishing and supply-chain parameters – and business planning tools for HP Indigo users. The free software calculates job costing for both toner- and ink-based presses. It also includes a new feature that allows users to import jobs from an MIS to profile monthly production activity.

HP is also focusing on the development of its online HP PSP Locator, which is scheduled for release in 2010. According to the company, this tool allows “digital print customers to locate HP PSPs in their area for their print fulfillment needs.”  The company also plans to showcase various large-format inkjet machines, including the Designjet Z3200, Z6100, Designjet L65500 (with latex Ink compatabilty) and the Scitex FB6100 UV.