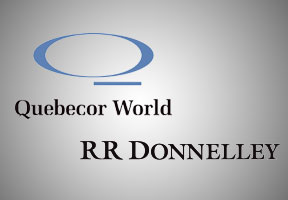 RR Donnelley & Sons Company states its proposal to acquire substantially all of the assets and assume certain liabilities of Quebecor World has expired.

“We are disappointed by the decision of Quebecor World to reject our June 8 proposal,” said Thomas Quinlan III, President and CEO of RR Donnelley (RRD). “We believe that our proposal was undoubtedly in the best interests of creditors based on a comparison of the distributions under our proposal with the distributions under the proposed stand-alone plan of reorganization. We are particularly disappointed because of the efforts and concessions made by us to adapt our proposal in response to concerns that were communicated to us.”

RRD’s original May 12, US$1.3 billion proposal to Quebecor World was soon followed with modified versions. RRD states these June 2 and June 8 modifications – amounting to about US$200 million in cash and stock – were based on “preliminary due diligence” and to respond to feedback from certain Quebecor World creditors.

“This would have been an excellent fit for RR Donnelley and the best opportunity for the Quebecor World creditors. However, given our view of the Quebecor World operations, a transaction ascribing a higher value to Quebecor World than we offered in our last proposal is simply not in the interests of RR Donnelley,” said Quinlan. “We look forward to continuing to pursue other strategic initiatives.”