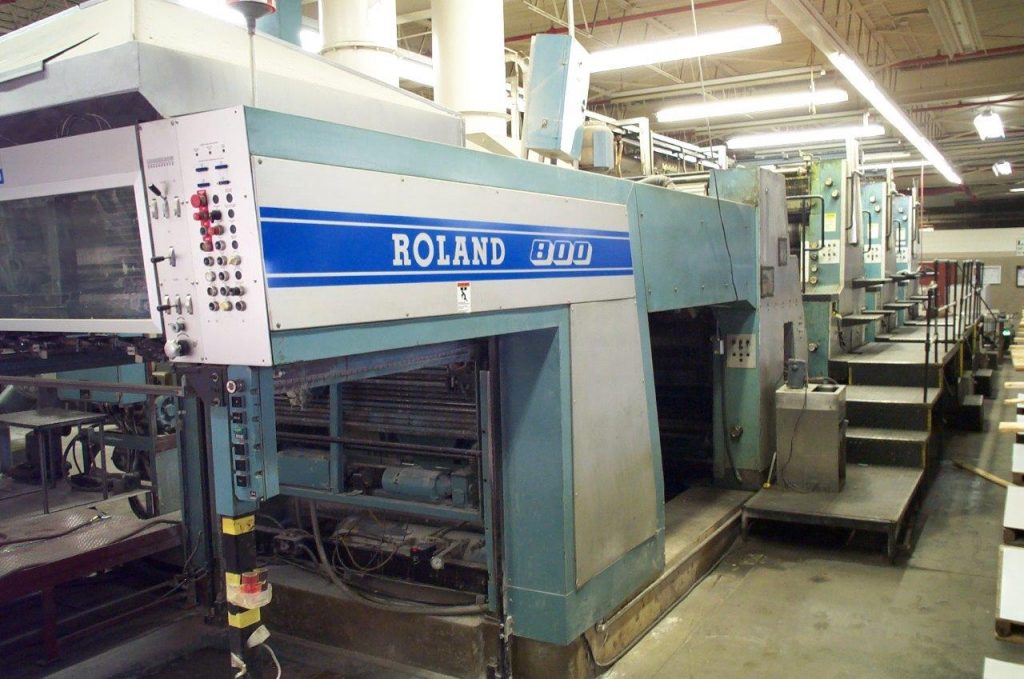 Manroland, or Roland Offsetmaschinenfabrik Faber & Schleicher AG, as it was known in the 1950s, was the largest manufacturer of commercial offset lithographic presses between 1950 and 1990. Roland has been churning out offset technologies since 1911 when the brand name, Roland, was first bolted to the side of a press. A 1966 purchase of shares by the giant M.A.N. Group culminated in a 1979-takeover of the company. The company name was also changed to Manroland.

In the 1920s, German printers started paying attention to the new offset technology now underway in America. In the European world of stoic letterpress, Roland was an outlier and exhibited the most interest in developing radically new offset machines that would soon displace centuries-old typographic art. Therefore, it was a bit of a shock when the German juggernaut, Koenig & Bauer (K & B), made a deal with Roland in 1921. K & B agreed to cease production of their offset presses while Roland stopped its cylinder letterpress manufacturing. K & B mistakenly assumed letterpress would continue to dominate the market. A few years later, another surprise lit up the German press when the much larger Planeta aggressively pursued a merger with Roland. In 1927, both companies called off the deal, which was initially orchestrated by Planeta, and designed to remove a competitor from the marketplace. If only foresight was as reliable as hindsight?

Jumping ahead to 1934, Miehle Printing Press & Manufacturing Co. agreed to license certain Roland features for use in their offset program. Miehle thought so highly of Roland’s new Ultra RZU, first shown to the public at London’s 1936 Olympia Exhibition, that they negotiated a further licensing agreement. It allowed them to use additional patents and drawings in the construction of their Chicago-built Miehle 60- and 76-in. offset presses. A fee of USD100,000 dollars (USD2-million today) was agreed and paid, but later seized by the US government at the beginning of the Second World War.

New Roland offset technologies had come a long way, especially in the post-war years. Roland now had an industry-first and well-accepted five-cylinder design delivered on a stable of platforms such as the Parva, Rekord and Ultra. The Mabeg feeder would prove to be the world’s best feeder—it spawned today’s hi-tech versions. Ultimately, all these attributes along with the rare use of anti-friction-bearings and easy operational adjustments forced the industry’s operators to take notice of the brand. Great Britain and the United States, both major markets outside of Germany, would be home to thousands of Roland offsets from 1951. Roland started conservatively in America by initially selling single colour 29-in., and then 36-in. presses.

A Roland Rekord printer in action.

The first US printer to install a Roland

On July 27, 1951, the first Roland Parva RP (known in America as the Miehle-29SC for its 23 x 29-in. sheet size) went to the Philadelphia firm of Edward Stern & Co. The company can trace its history back to 1871. Incidentally, Roland was established the same year in Germany. Bearing the serial number 8162-2, this Parva RP single color caught storm quickly, and by 1954, over 250 Roland presses were sold in America.

The Ultra range of presses, with sheet sizes of 41- to 63-in., would soon find homes in book and folding carton plants. The first recorded Ultra four-color RVU-5 (Miehle-49-FC, a 36- x 49-in. sheet size) was installed on August 10, 1960, at Gulf States Paper Co. in Maplesville, Alabama. Gulf States prospered over the following decades while remaining a loyal Roland and Manroland customer for a good portion of that time. Today, after numerous mergers and acquisitions, Gulf States is part of WestRock, the country’s second-largest paper packaging producer.

The Favorit (Miehle Favorite) officially launched at Drupa 1967, but was already in development by 1964. It created a buzz around the world. After the Miehle coming out party at PRINT-68 (Chicago), Favorits’ started selling briskly even though they were an expensive 19 x 25-in. press. The earliest serial number [press]—3914/21181—was on display at Miehle’s showroom in Chicago for a few years, and then sold to Bradley Printing Co. of Des Plaines, Ill. Not far behind was the Ray Printing Co. Inc. of Kansas City, Mis., when their Miehle Favorite (Roland Favorit RF01 with serial number 3919/21257) was installed on May 14, 1968.

Perhaps the most interesting sales were to the Central Intelligence Agency (CIA) in Washington. On September 3, 1968, two Favorites, serial numbers 3934 and 3935, were powered up at the CIA’s rather large and well-equipped printing plant in Mclean, Vir.

PRINT-68 was also the year Miehle asked Roland to change the colour of their presses from grey to blue. Roland agreed, but only for North America. Only in 1974 did other presses follow suit.

In 1971, when Roland’s 100th anniversary was being celebrated, over 5,000 offset presses had been delivered to countries around the world. Roland held 21 per cent of the Japanese market, well over 40 per cent of the American, and even higher in the United Kingdom. If experience and longevity count, then Manroland has held a pre-eminent position for the last 70 years in offset.

This article originally appeared in the May/June 2022 issue of PrintAction.