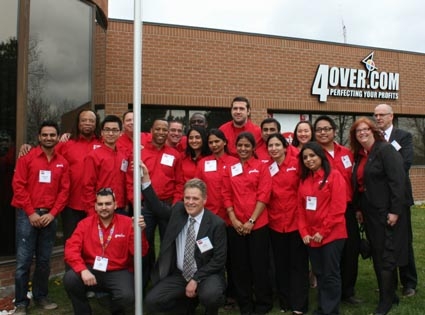 “We have the potential to meet any expansion plans,” Mayor McCallion joked, while welcoming 4over Inc., a California-based trade printer, to Mississauga. The city is now home to 63 Fortune 500 headquarters, while holding 80 total locations of Fortune 500 companies, along with over 55,000 businesses – and a population of around 730,000.

McCallion has been building Mississauga for 34 years as its Mayor, while 4over Inc. has been on its own rapid trajectory for the past decade, after Megerdichian and his wife, Tina Hartounian, President of 4over, founded the company in 2001. Today, 4over runs seven production plants across North America, including the new Mississauga location that began producing work in December 2011 under the leadership of printing veteran Tom Hogan. 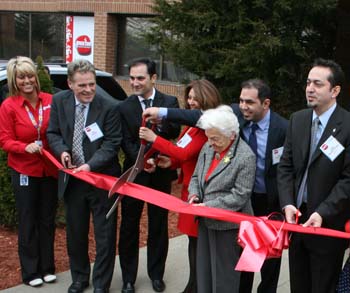 Hogan played a key role in the printing of The Globe and Mail newspaper with outsourcing production to Interweb Ontario. He was also involved with the start-up and development of Transcontinental Metropolitain, which produces La Presse newspaper in Montreal. During the 4over Canada grand opening, McCallion spoke about closely working with Hogan, years ago, when he was involved with the Mississauga Booster community newspaper.

While Mayor McCallion was open to welcoming another 4over site in the city, Megerdichian is currently in the process of opening up a ninth facility in Seattle to boost his trade-only, hub-and-spoke business model in the Northwest region of North America. 4over claims to have served over 53,788 trade customers across its entire operation, experiencing annual triple-digit growth.

“We are very happy to be here and we will do our best to serve you,” Megerdichian told a sizable crowd of printers and suppliers gathered in 4over’s Mississauga plant. In addition to an existing 29-inch Komori, he spoke about plans to bring in a 40-inch press, as well as a press for plastic applications, while noting the close proximately of 4over plants in Ohio and New Jersey. “There is an organization that stands behind the [Mississauga location] for this plant to be successful.” 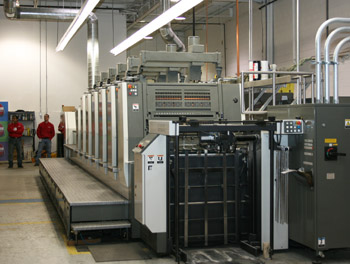 4over Inc. has a unique business model in North American printing, as a multi-facility trade-only printer, driving most of its business through a members-only online entity called trade.4over.com. The company is also a chosen printer for B2C online print retailer redtagprintsale.com.

Along with the 29-inch Komori sheetfed, which, as with all 4over plants, promises to run at 500-line screen, 4over’s Canadian plant also includes a sizable bindery area and a large-format inkjet department, which Megerdichian began to introduce into his facilities, under the name of Grand4mat, back in 2009.